The War on Christmas

Hooray, Christmas is coming, everyone to your battle stations! It's time to lace up the combat boots, fire up the tanks, and fight. That's right, we Christians are in the middle of an historic fight for all that we hold dear. One might compare it to the Battle of Tours in 732; the fate of Christendom hangs in the balance. From all sides, the death machine of secular society is closing in on an innocent baby in a manger. Bent on destruction, they will not stop until they have desolated all that is holy. That is, unless we few, we happy few, we band of faithful and pious believers raise the cross as our standard and dash the godless monstrosity on the rocks of our faith. I'm not even kidding. 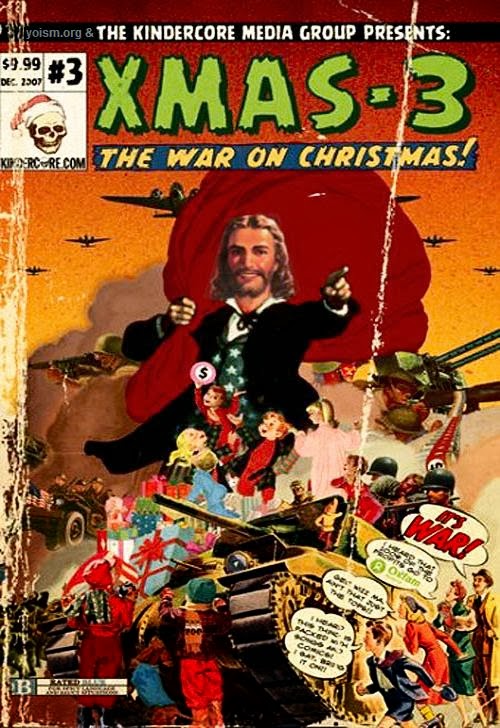 There really is a war on Christmas, but it's not the one you're thinking of. Conservative news outlets have maligned the evil of saying "happy holidays" instead of "merry Christmas" calling it an offense to traditional Christian values. We are seeing outrage over menorahs, and even a festivus pole, taking their place on public buildings right alongside nativity scenes and Christmas trees. This, however, is not the war on Christmas. This is a diversion that will distract Christians while the enemy mounts a sneak attack, infiltrating our culture and destroying us from the inside.

You see, you might think that the leader of the secular forces is the ACLU, Barack Obama, or some other godless liberal powerhouse. You would be wrong. In fact, the godless liberals of the media are just a pawn in the army of the true enemy: Santa Claus.

If you are shocked, appalled, and slightly offended by this news, it is evidence that evil has already started to win the hearts and minds of the people. Don't get me wrong, I believed in Santa Claus when I was a kid. There is nothing intrinsically wrong with what Santa Claus represents: boundless generosity, a gracious spirit, and a heart for children. Santa Claus, however, has come to represent the worship of money. Everywhere you go, people are putting up Santa's face instead of our Lord's. Santa represents the sinister promise that buying stuff will be awesome. This is a false promise. The only hope for our nation, our families, and our lives is Jesus Christ. Santa has stolen our hope in Christ for himself and the material gifts that he represents. 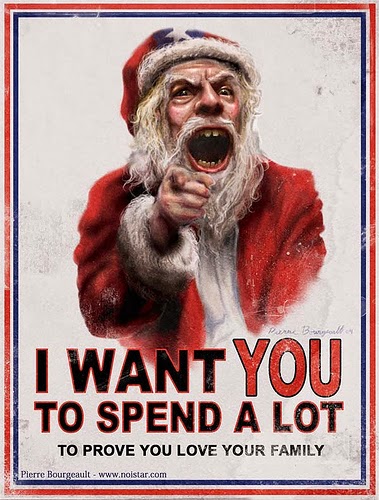 I was appalled to see a conservative, Christian analyst on Fox news insist that Santa Claus is white. It is sad to me that she thinks that she is fighting against liberals in the war on Christmas. The war on Christmas is a war on the Lord, Jesus Christ, and all that he taught. Santa is a mere idol. Santa has fooled us that we have to defend him so that we will give him the glory EVEN AS HE CRUCIFIES OUR LORD ALL OVER AGAIN.

We Christians are killing ourselves! We have our own people jumping to Santa's aid, completely missing the point of Christmas while it becomes a more and more secular holiday. We think we are defending the faith by denying that Santa could ever be black and holding up the Christmas tree like some kind of golden calf. Are we defending the idols of our own cultural celebrations of Christmas, or are we defending the gospel? Personally, I am a conservative Christian and so I am in favor of keeping the Christ in Christmas. Christ, not Santa. 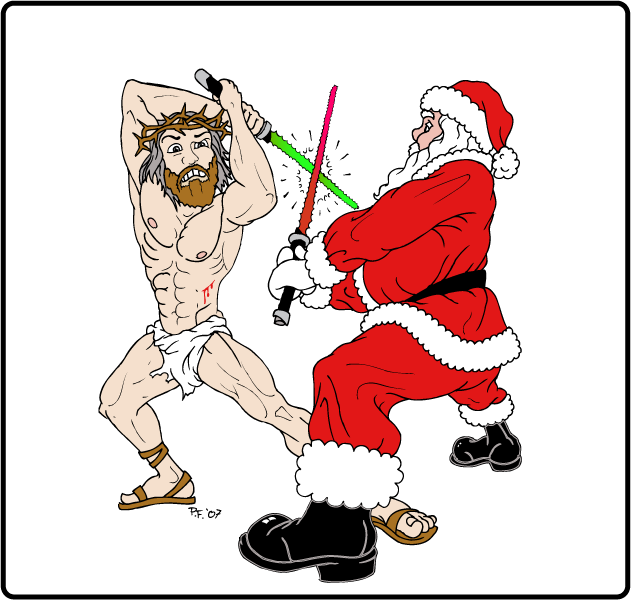 The war on Christmas is real, and the enemy is Santa with all of his wicked elves who own malls and cell phone companies and banks. CEOs are the generals in Santa's imperial army. They have an extensive propaganda machine that includes all media. They have co-opted Christmas and made it a secular, consumer, capitalist holiday rather than a Christian holiday. And as a result, we are making them rich. We are rewarding them for luring us away from God's love and promising us that they are better than God.We have been fooled into believing that Christmas is about spending money on stuff. That Christmas is about overindulging in spiked eggnog (recipe coming!). That Christmas is about Santa. Some Christians have been fooled even to the point of going to war for Christmas idols!

No! Christmas is about celebrating the fact that God is with us. Jesus Christ is here. Here to stay. It is foolish to hope in the Samsung Galaxy that we might unwrap. It is foolish to hope in what Santa might bring. Rather, our hope should be in the Lord. My challenge to myself, and to you, this Christmas is to make it about Jesus. This is hard. It will involve reading scripture. It will involve going to Church. It might even involve awkwardly praying with your family. But it is worth it.

As a final word, I would like to bring up Advent. In the Christian tradition, Advent is the season of waiting for Jesus and preparing for his appearance. If part of your preparation for Jesus' coming includes finding gifts for others, I encourage that and I'll be doing it too. But please help me make it about preparing for Jesus, not waiting for Santa. Although, I'll confess that my sisters and I loved watching "Barney: Waiting for Santa" when we were kids. God got back me to me on that one, saying "I could not address you as people who live by the Spirit but as people who are still worldly--mere infants in Christ. I gave you milk, not solid food, for you were not yet ready for it." If you're ready for the real deal, the solid food, you are ready for "Barney: Waiting for Jesus." 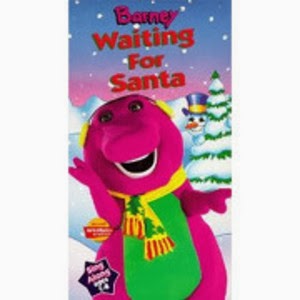 This weeks' drink is complicated but perfect for the holidays. In this way, it sybolizes the difficult nature of truly preparing for Christ.
Your Cinnamons are Forgiven
Ingredients: 1 oz. cinnamon liqueur, 2 oz. Grand Marnier, 1/2 oz. bourbon, fresh ginger and orange peel, brown sugar simple syrup.

Muddle a few slices of fresh ginger and a small piece of orange peel in a glass. Pour in cinnamon liqueur, muddle more and let sit for a few minutes. Pour in Grand Marnier and brown sugar syrup. Transfer to a shaker and shake over ice. Strain back into glass and then pour in bourbon. Stir if desired. Drink is delicious and strong so watch out: what if Jesus came and you were passed out drunk? Awkward. 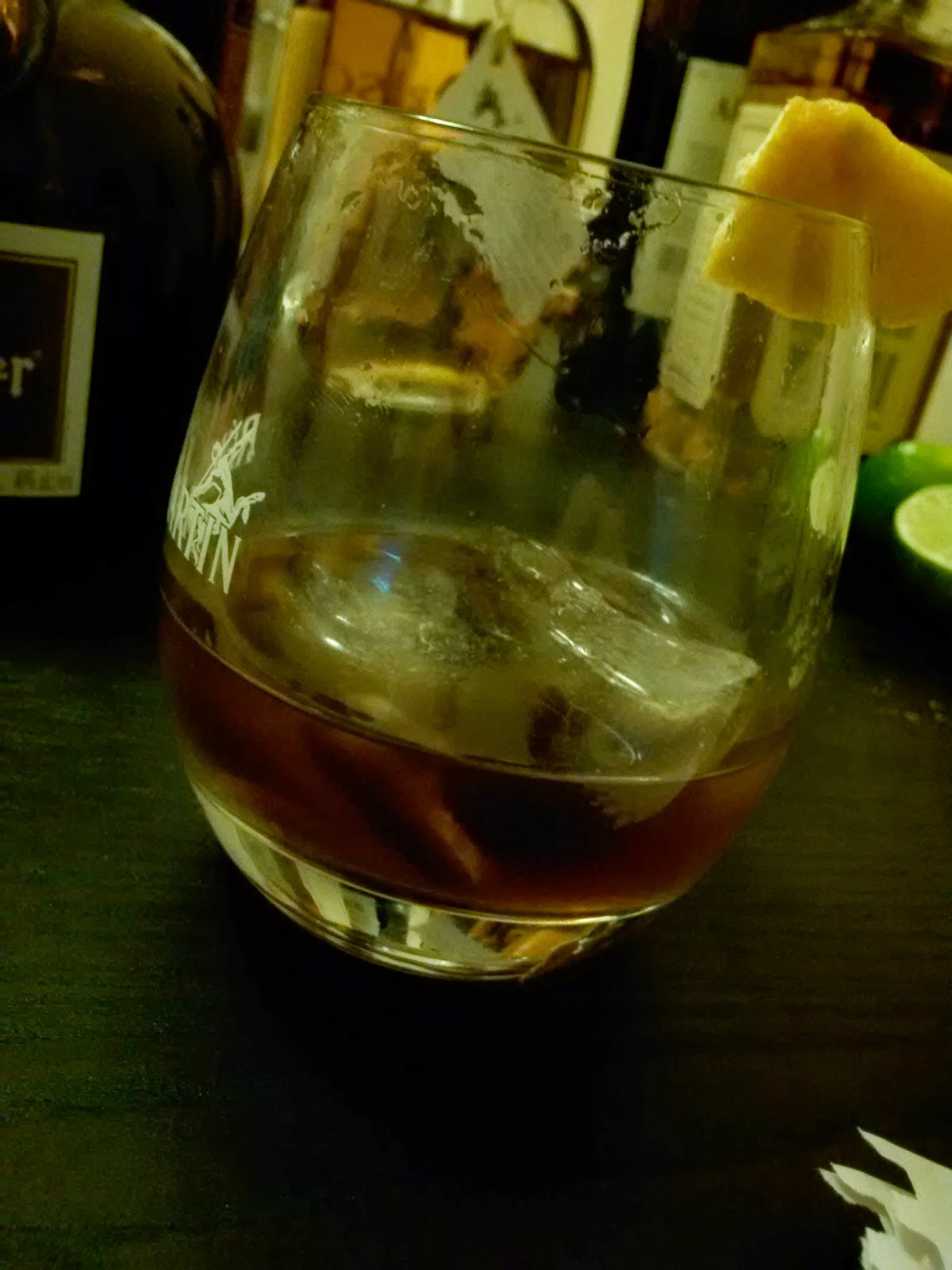